The new Caterpillar joystick steer feature is unique in its class bringing lots of benefits to the operator including making the steering of the machine easier and lowering the risk for repetitive strain injuries. The joystick is mounted to the side of the seat, so it swings with the seat when the machine moves, which is ergonomically better than having a fixed steering wheel. After a day of manoeuvring a Caterpillar with a joystick, operators have reported a reduction in arm fatigue, which is a very significant health and safety benefit.

In machines with a joystick, the steering wheel is removed, which gives the operator more visibility. The operator can see other people much better, work more precisely and safely. The feedback the joystick gives to the driver is force and speed sensitive. There is even a switch to select gears and buttons to choose between forward, neutral and reverse.

Larger Caterpillar machines already have joystick steering fitted as standard. For the recycling and waste sector, medium-sized machines are often the preferred customer choice, the Cat 950M wheel loader in particular is favoured for its versatility. It is the ideal machine for shifting material at recycling or waste transfer and processing sites. For these machines steering wheels are currently fitted as standard but the joystick is an optional extra. 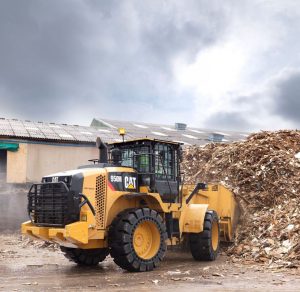 “I believe joystick steering will become as common as seatbelts,” explained Gary Lambert, key account manager for industrial and waste at Finning. “In waste management, companies used to be hesitant to introduce entirely new technologies. They saw it as a training issue,” continued Lambert.

“For us at Veolia, the trial was very successful,” explained Robert Oliphant, Head of Fleet & Support Services at Veolia UK & Ireland. “The Caterpillar articulates at the same speed as the joystick which gives the operator much greater responsiveness. The joystick is very intuitive and the machine basically goes where you point it.

“The Veolia plant in Kirkby-in-Ashfield has a lower staff turnover than other recycling plants, so this is the perfect environment to test such machines,” continued Oliphant. The site also operates in a confined space, which normally necessitates a lot of wheel turns. With the joystick, the many tiring wheel turns are a thing of the past — now it is all in the wrist.” 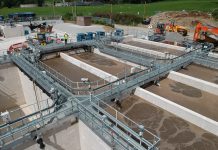 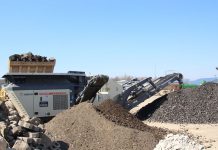 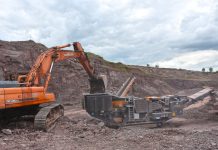